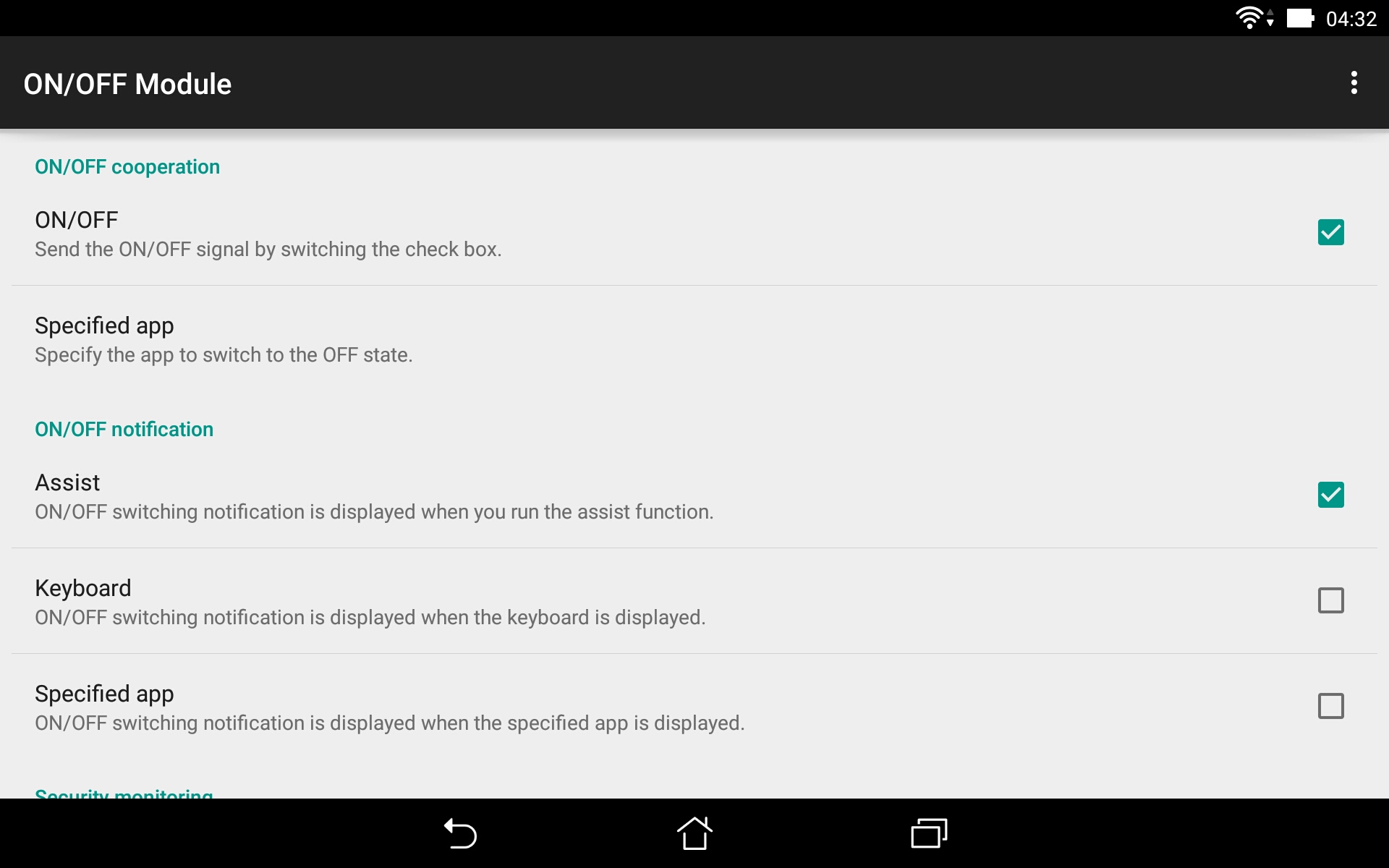 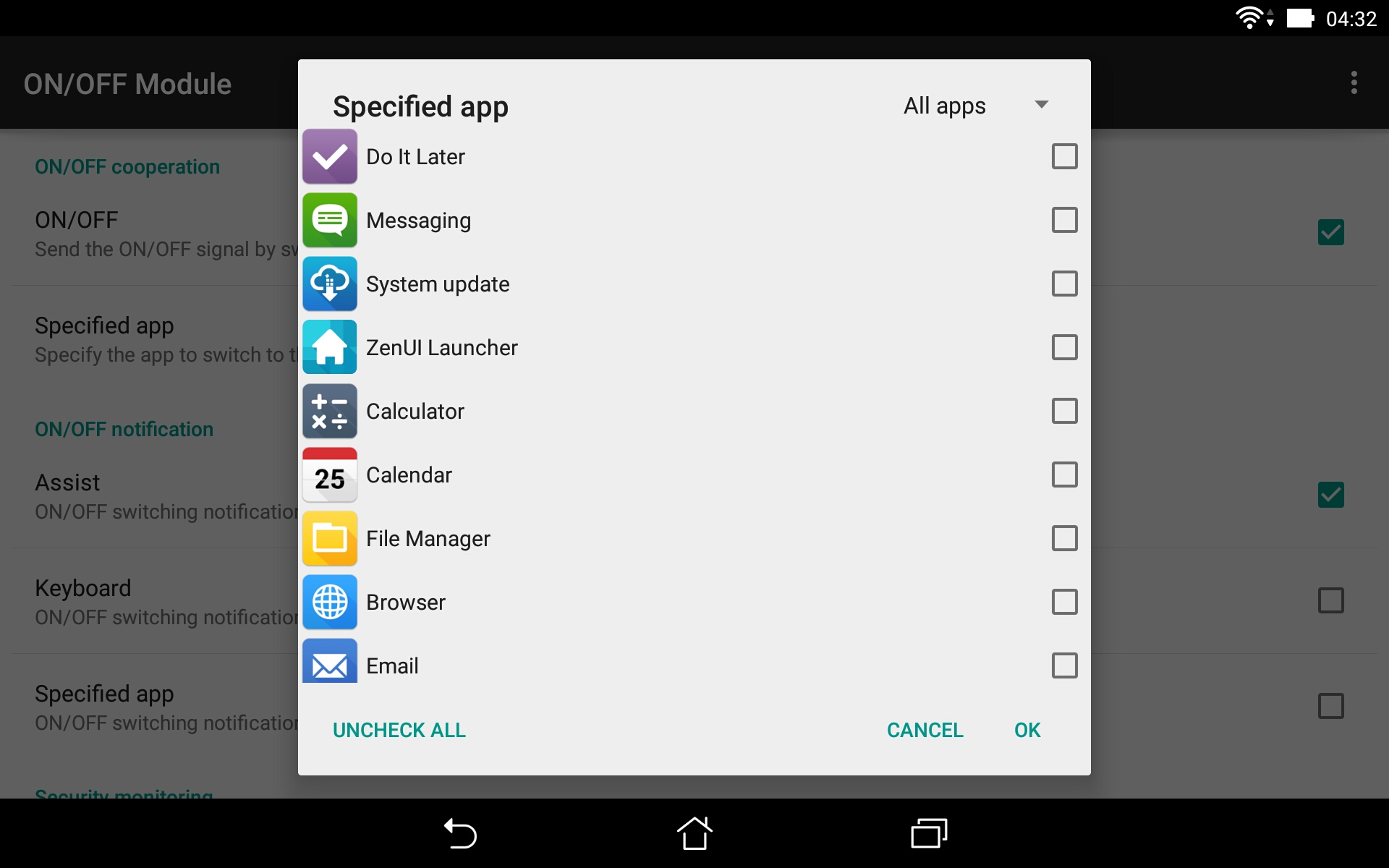 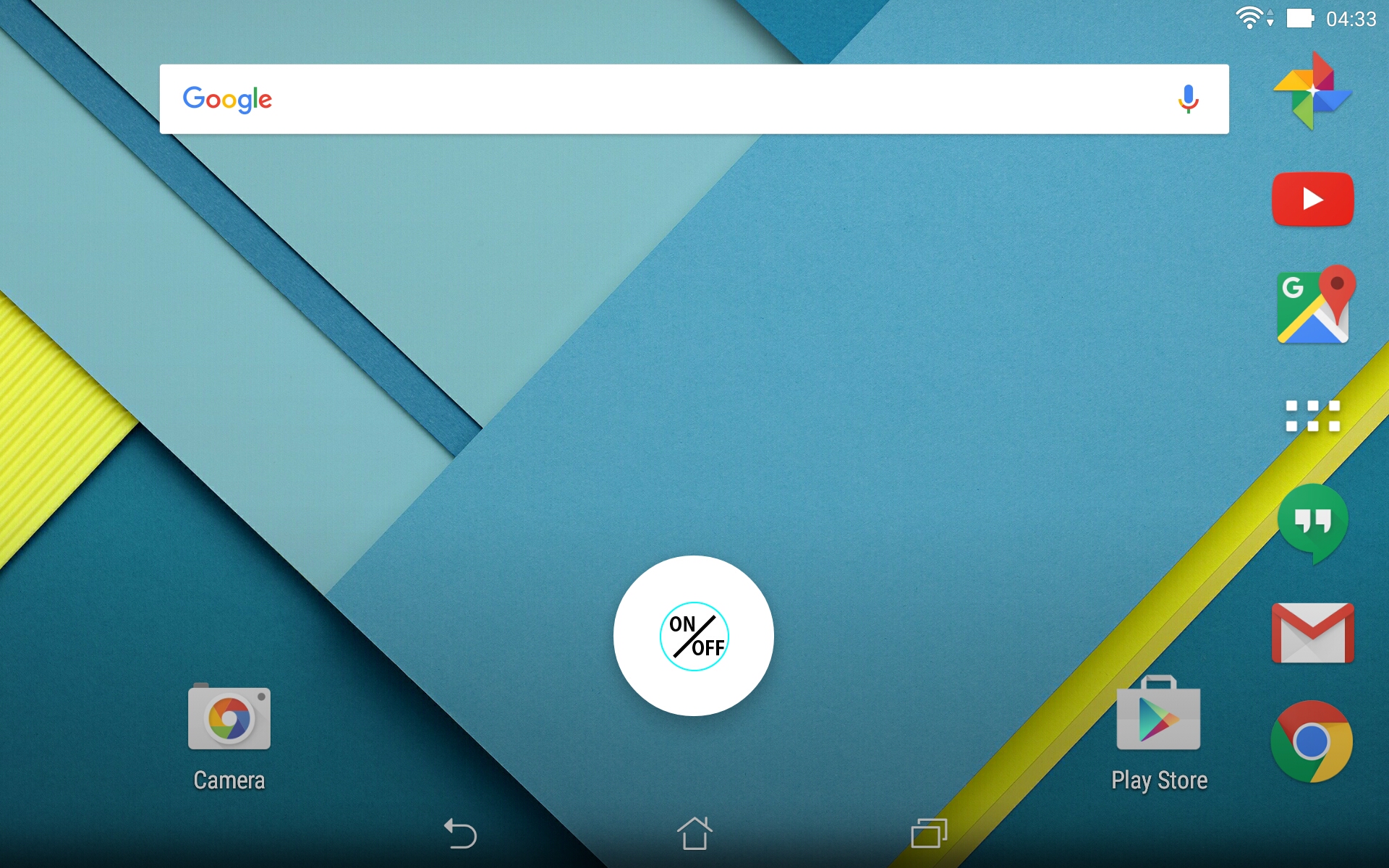 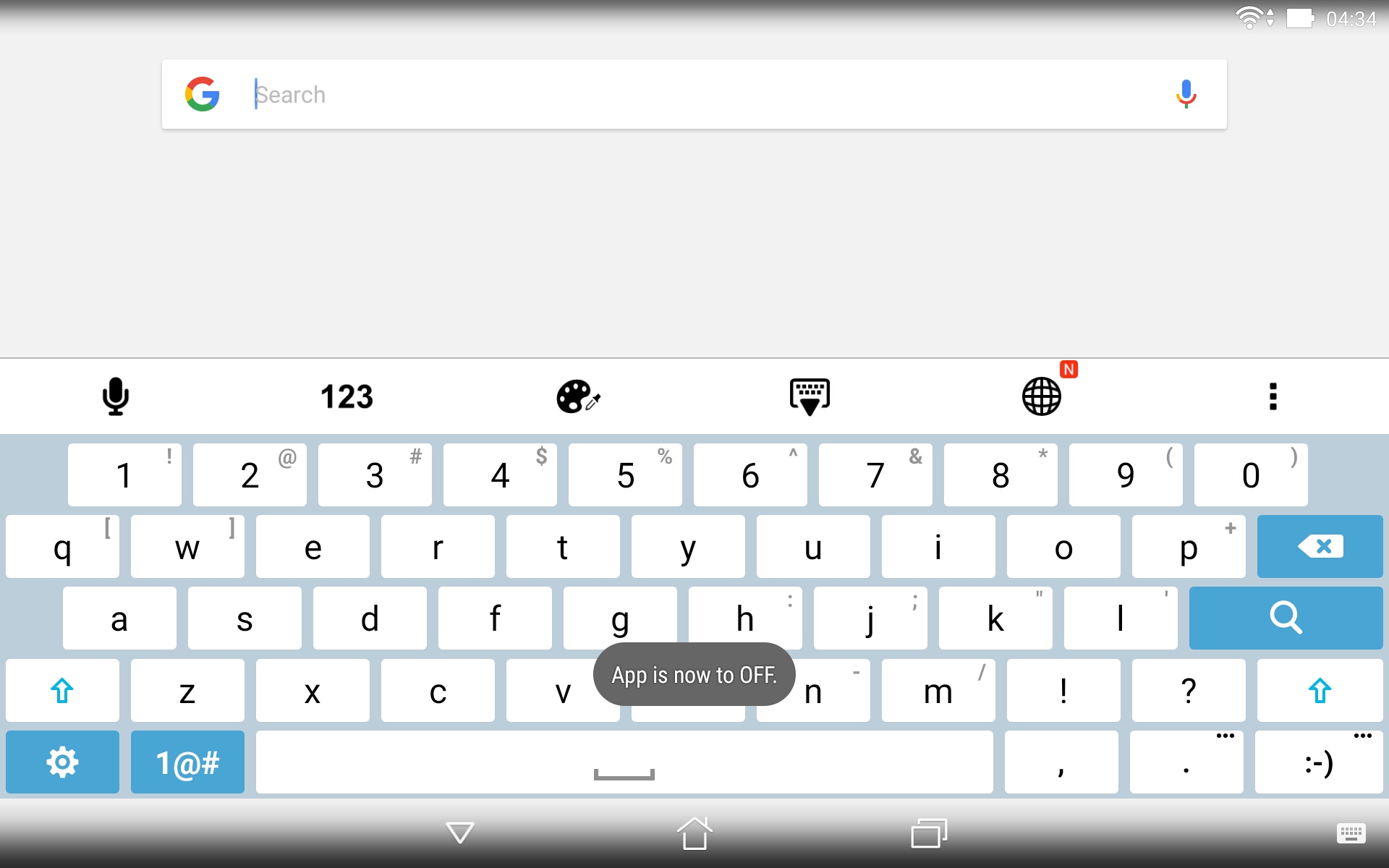 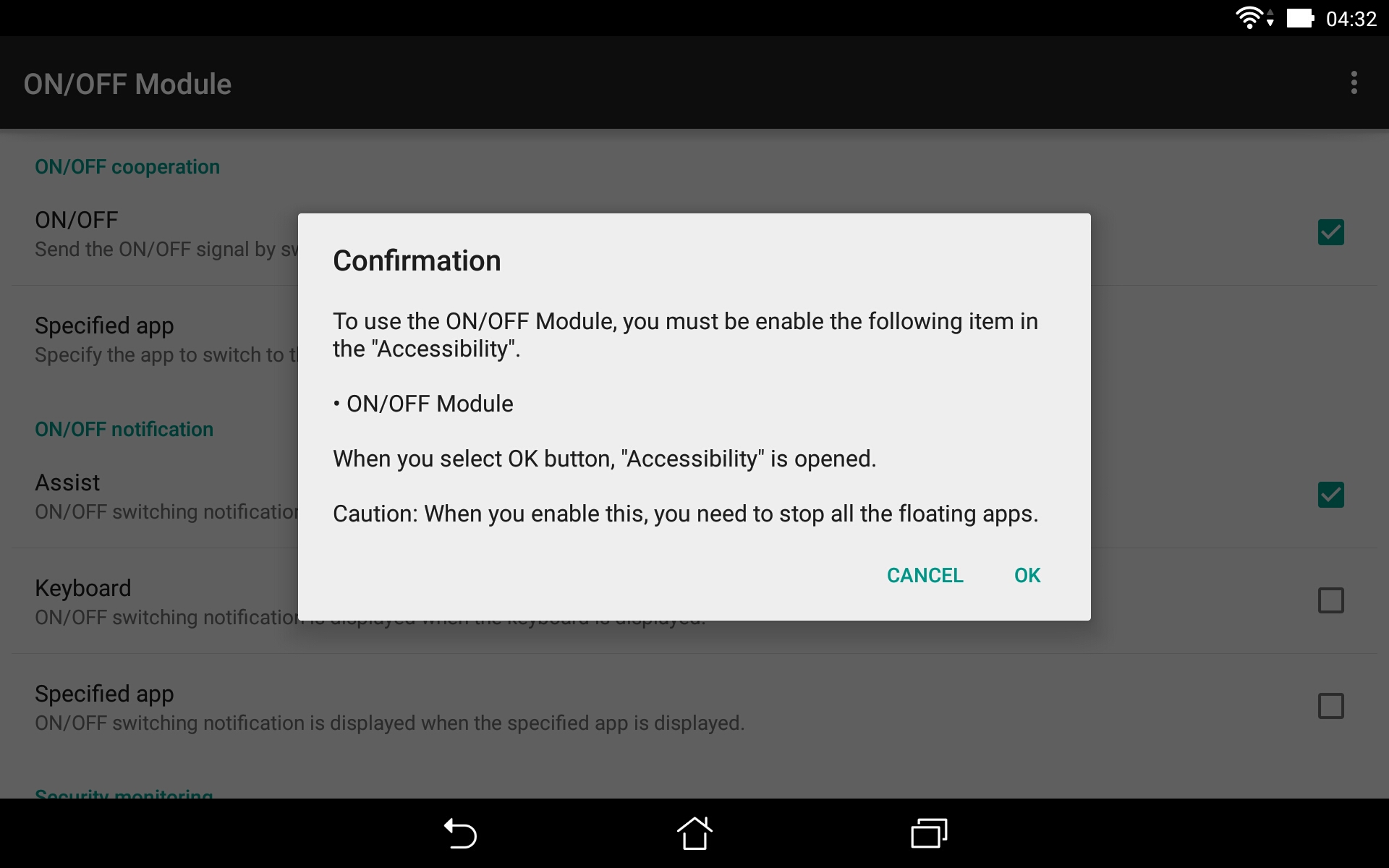 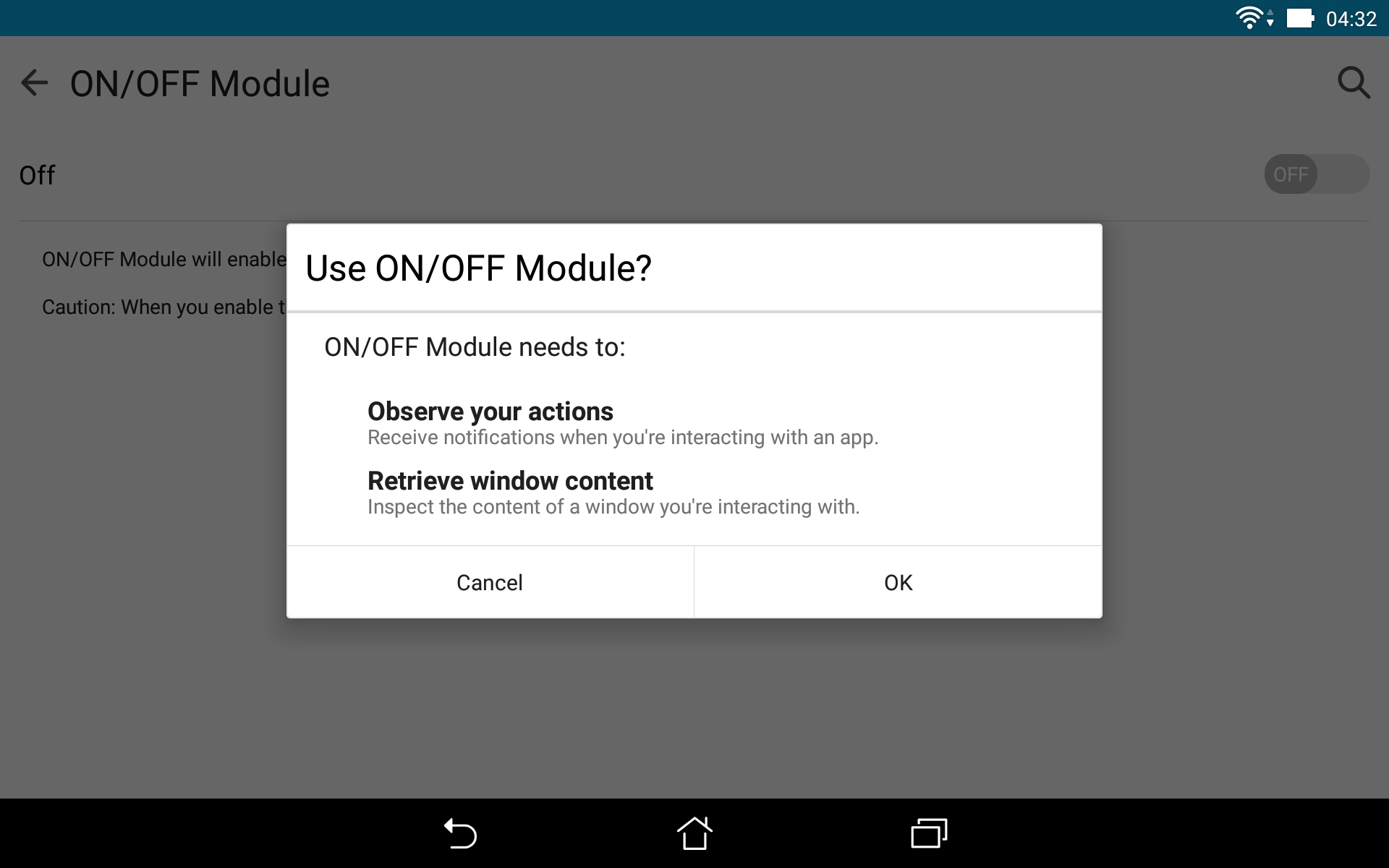 This module app sets the timing of the ON/OFF to app produced by SFApps.
This app has a successor version compatible with Android 7.0 or later.
・Support Tool

Caution:
If you want to use the ON/OFF cooperation function, please install the cooperative apps.
Then, please check the function you want to cooperation from "ON/OFF cooperation functions" setting.
If you are using Android 4.0 or later, you will need to enable the accessibility function.
In case of using Android 5.0 or later, before you enable the accessibility function, you will need to temporarily stop the apps that reside on screen and made by SFApps.

・ON/OFF cooperation
The app that cooperation function is enabled can be ON/OFF by switching the check box.

・Assist cooperation (Android 4.1 or later)
Switching ON/OFF by assist function.
Swipe up from the navigation bar. Then select the ON/OFF module.

・Keyboard cooperation (Android 4.0 or later)
During the screen keyboard is displayed, the target app is disabled.
This function is enabled when you enable the accessibility function.

・App check interval for monitoring (Android 2.2-3.2)
The monitoring interval of the specified apps and installer is set.
The amount of the battery is improved when the value is increased.

ON/OFF notification
Whether to display a notification can be set for each cooperation function when the ON/OFF switching is executed.

Security monitoring function
This function, while the "Apps that can cooperate" is running, Android security functions in operation, to avoid the phenomenon that no longer press is positive button.
Caution: If you are running floating apps other than apps of SFApps, you need to stop the app manually, because this app can not avoid the Android security.

・Permission (Android 6.0 or later)
Security is avoided when the authority of the app is permitted.

・Screen capture (Android 6.0 or later)
Security is avoided when you allow the screen capture.

・Accessibility (Android 5.0 or later)
Security is avoided when the accessibility function of the app is activated.

・Installer
Security is avoided when a third-party app is installed.
If this function does not work properly when you install it, please perform the installer registration.